The resolution of surveillance drones just got a whole lot better. In a recent episode of NOVA (see link below), details of the ARGUS 1.8-gigapixel imager were revealed. My initial thoughts of the system are: 1. Sure the imager is impressive, but the applications of the imager are even more impressive. 2. Details of the imager were described at a high level, as expected, but I did notice in the playback that the program was using Object Video for video analytics. Having personally dealt with some of their early software, I can only imagine the capabilities of this system, both good and bad. Setting up rules for motion and object detection are hard enough with a fixed camera. Making those rules adapt to changes in altitude, speed, object size, and lighting ...wow...now that's a challenge. Kudos to all the engineers working on that one. 3. Based on the modular pod shown, it appears this sensor is adaptable to a whole host of aerial platforms. The ideal platform for a rig like this, in my mind, would not be the helicopter, as shown in the video, but a stable 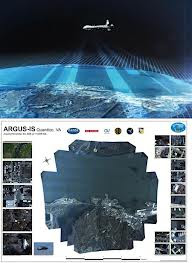 low earth orbit superpressure platform specifically engineered for long mission duration. With 100+ day capabilities, a low earth orbit platform carrying Argus is the first step in continuous deep-recording wide-area surveillance. The ability to rewind EVERYTHING that happened days, or even weeks, ago and zoom in ANY area within a 15 mile diameter (or more) will be more than helpful for future defense and law enforcement use. Although some will fear yet another new Eye In The Sky, I'm a fan of the project and will be posting updates on the technology as they are released. So far, it looks like a winning solution.
LINK:
http://youtu.be/QGxNyaXfJsA

Posted by Security.Insider at 1:18 AM